Apple IIe - Without a Keyboard

While cleaning the keyboard here I noticed a strange problem.

After I had cleaned the keyboard, the machine consistently did not boot correctly. Instead, it would boot to the internal self-test routine. This is usually invoked by pressing solid apple-control-reset. However, instead of displaying "Kernel OK" that I would expect (or a RAM error, or similar if there was a fault with that component) the self-test immediately repeated.

Referring to Understanding_the_Apple_IIe.pdf (page 313) it became clear that the self-test routine will repeat endlessly if the computer detects that the closed apple and solid apple keys are held down: 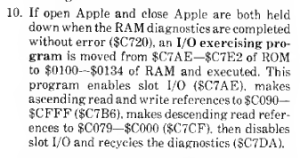 Although these had been cleaned thoroughly with contact cleaner, this intermittent "sticking" was obviously internal to the switch itself, as even with the post of the key raised, the keypresses were registered by the machine.

This makes using the computer at all impossible, as the self-test cannot be interrupted.

I removed the keyboard connector, but the same behaviour was seen.

I then referred to the schematic diagram of the keyboard from the same book (page 178). 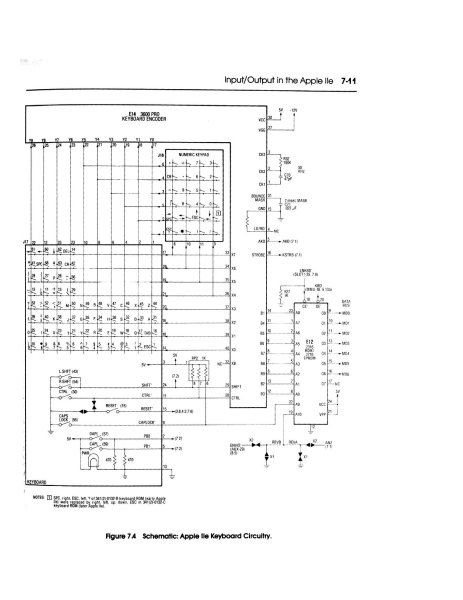 It can be seen here that the open apple and closed apple OAPL, CAPL are normally open switches corresponding to pins 7 and 5 respectively on the keyboard connector. These are usually tied to ground through two 470ohm resistors. 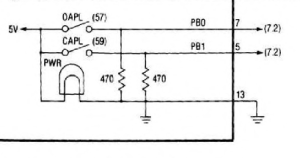 I fabricated a small bridge connector from DuPont cables, that shorted pins 5,7 and 13 (ground) on the motherboard keyboard connector. 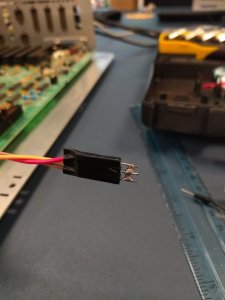 This allowed the machine to boot OK, albeit without a keyboard!